Apology Song
Make You Better
Lake Song
We Both Go Down Together
The Engine Driver
The Wrong Year
Rox in the Box
Los Angeles, I’m Yours
The Abduction of Margaret
The Queen’s Rebuke / The Crossing
Annan Water
Everything is Awful
The Crane Wife 1 & 2
Sons and Daughters
—
Save Yourself (solo)
The Tain 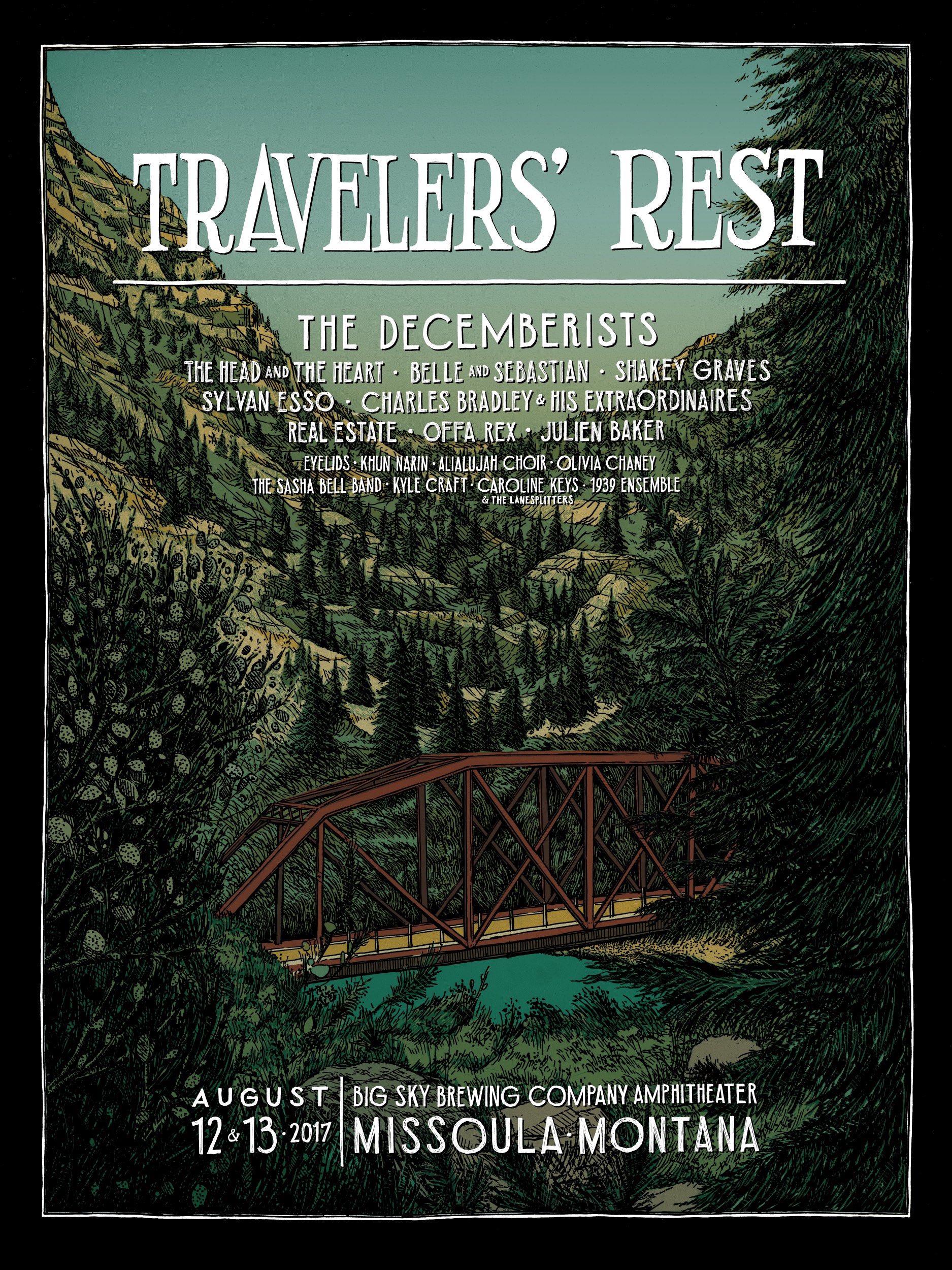 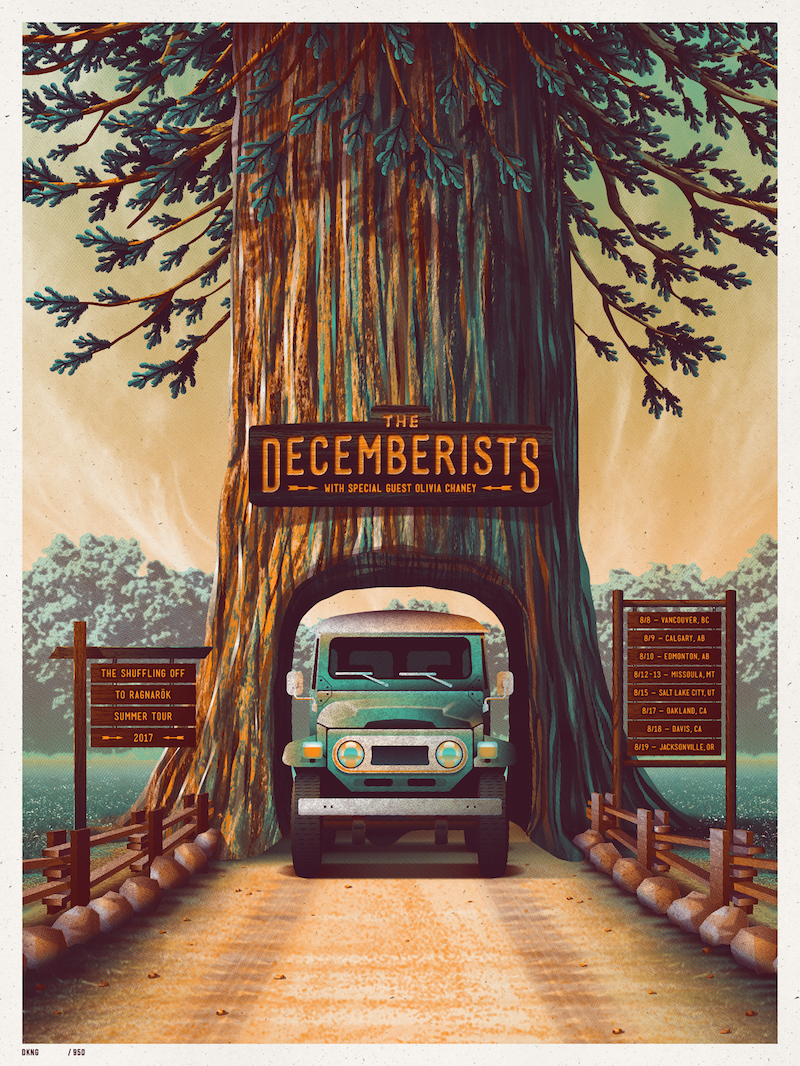 After years of careful planning, calculating, soul-searching and soul-corralling, The Decemberists are pleased as punch to announce their first ever curated 2-day festival, taking place in Missoula, Montana on August 12th and 13th, 2017 at Big Sky Brewing Company Amphitheater. It’s called Travelers’ Rest. History-minded readers will recognize that the festival is named after the historical site, some few miles south of town, where Lewis & Clark were known to have made camp and put on their own two day music festival. It received mixed reviews; several critics noted that Meriwether Lewis’s band DySeNtErY, which headlined the event, was “overly morose” and the available food was “scarce” to "inedible.”

NOT SUCH, THIS TIME AROUND.

The Decemberists will be performing both nights of the festival, playing two unique sets, with other acts including the incredible Glaswegians Belle & Sebastian, the inimitable NWers/rabble-rousers The Head and the Heart as well as Shakey Graves, Sylvan Esso, Charles Bradley & His Extraordinaires, Real Estate, Julien Baker AND MORE TO BE ANNOUNCED. 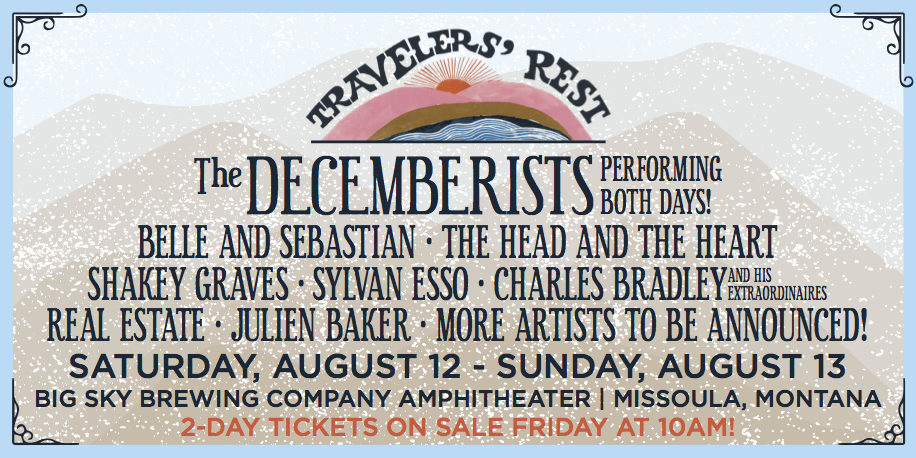 Quick back story: as many of you know, Colin Meloy has a special connection to Montana, having been born and raised there, and is tremendously excited to be putting this event together for Montanans as well as everyone in the region. Having been your typical moody, navel-gazing teenager, he often bemoaned the lack of national bands that toured through his home state and is naturally awfully proud to be doing his small part to bring a bit more music to Montana.

Two-day tickets go on sale en masse this Friday, March 24 at 10am Mountain Standard Time but you can get a crack at them at a special early-bird price tomorrow, March 23, at 10am using the password BITTERROOT while pre-sale supplies last HERE.

$1.00 of every ticket sale will benefit the ACLU of Montana. The band hopes to involve many such progressive organizations from around the state in the event; keep an eye on TravelersRestFest.com for more info.